What is Carbon Tax?

The Carbon Tax is one that greenhouse gas emitters must pay per tonne of carbon dioxide emitted from burning carbon-based fuels. To motivate emitters to change their practices to decrease emissions, the price goes up over time, so households and industries have time to adjust and adopt less carbon-heavy practices. This is set to be implemented from April 1,2019.

This has come about from Canada’s commitment under the Paris Agreement to work towards reducing global warming. In response, the federal government established Pan-American Framework on Clean Growth and Climate Change, which set carbon tax at a minimum of $20 per tonne in 2019, increasing by $10 per year until it hits $50 per tonne in 2022.

Where a province does not have its own carbon tax plan by 2019, the federal carbon tax is imposed. Ontario’s cap and trade program has been cancelled by the current ruling party.

How is a Consumer affected?

This is an indirect tax on consumers, meaning end consumers will not have to pay the tax directly, but they will face higher prices for goods and services from industries that emit higher greenhouse gases and pass these costs through the supply chain.

A more visible impact for consumers will be gas price increases. Gas prices are slated to go up by 4.4 cents per litre in April 2019, rising to 11 cents a litre by April 2022. The carbon tax charge by fuel type is shown in Exhibit 1 below.

Consumers will receive a government rebate called Climate Action Incentive Payments to offset some of the higher costs they would experience, starting with the filing of their 2018 tax returns.

How does the Climate Action Incentive Payment work?

For 2019, an Ontario family of four, will receive $307 under this proposal, calculated as follows:

This will be claimed as part of the 2018 tax return filing and will be received as of the tax return assessment.

The payments in subsequent years (excluding the supplement for residents of small and rural communities) are expected to be as follows: 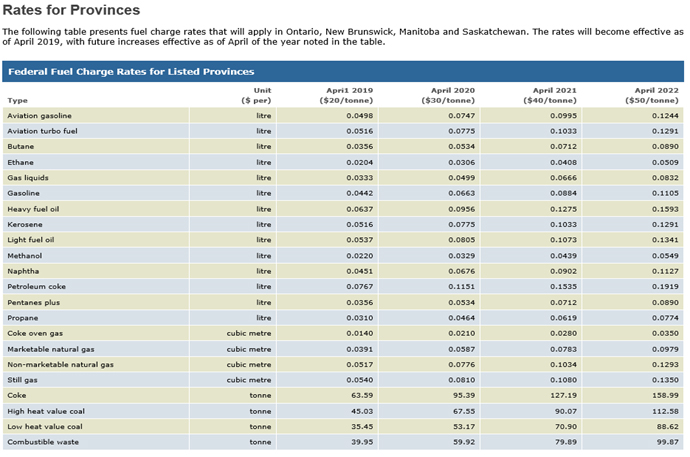 What about Quebec, Alberta and British Columbia’s Carbon Tax programs?

Quebec has a cap and trade system since 2013.

British Columbia has had a carbon tax in place since 2008. Emissions in the province are now $40 per tonne, rising by $5 per tonne each year until the cost reaches $50 per tonne in 2021.